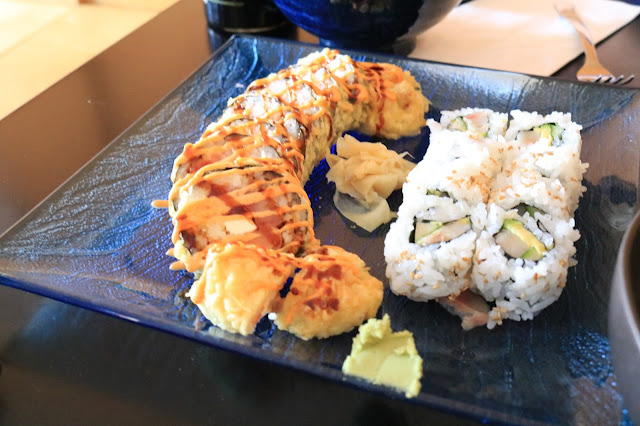 I will explain the difference between Japanese and American sushi.

Sushi is the most famous Japanese food in the world.

Japanese style sushi is very simple. A piece of raw fish on a handful of rice, that's it.

Therefore for Japanese sushi, fish, rice and soy sauce must be very important.

On the other hand American sushi is very colourful and fancy.

American sushi is almost rolls not "nigiri" like Japanese sushi.

American sushi is usually made with rice paper or soy paper but not seaweed paper. And its sometimes fried.

Because many American people don't like raw fish and seaweed paper.

That is one of the reason why their sushi looks like not Japanese sushi.

Ingredients are naturally important but for American style sushi has another important thing. That is" Sauce"

Sauce means not only soy sauce, but also there are also wasabi, spicy, mayonnaise, mustard, ponzu, eel sauce and so on. Can you imagine? They have many kinds of sauces and those sauces make their sushi looks so beautiful and interesting like art. And sauce is very important thing of taste.

I'm unsure if i have ever seen Japanese sushi made as creatively as American style sushi.

Normally I chose not to eat at sushi restaurants in other countries. But I recommend American sushi for Japanese visitors. It's very delicious and beautiful. I think American sushi is worth to try.

P.S. Do you know "Super white tuna" ? In Japan I've never seen before. I googled. It said in Japan we must not sell this kind of fish. Because the fish is not good for health if people eat much. So I will try little bit. ^ ^