I launched new CrowdFanding for our new book. 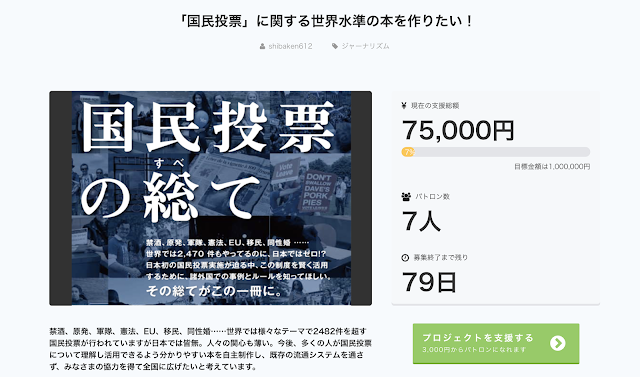 In 2014, I reported Scottish "Independent" referendum. At that time, I was supported by the people who donated on the crowdfunding site. Thank you very much for all.

Then last 2 years, I researched Irish "Gay Marriage" referendum, and "Brexit" referendum in the U.K in the field.

Last week I launched new crowdfunding for a new book "Referendum around the world for Japanese" I'm a member of the writers. I read many books about referendums these days.

I think the book is critical not only for Japanese but also others because now the days, I'm pretty sure that many people think "I know the truth but others don't know it or just must be lied to." That kind of people doesn't feel sympathy for other sides. Typical examples are "Brexit" and "Trump". Individuals who chose "Brexit" or "Trump" have the reason where they stand on their ground. Democracy is based on the thought "We are all different people, and everyone has the same power for politic. However, people can say easily "Populism". Politicians must not infringe minorities human rights, but they should think for wide range happiness or benefits. Democracy is totally working in U.K and U.S at a minimum. If people may make a mistake, it sometimes happens. This is a human being but don't forget "I respect your opinion, so Please accept my opinion. We live together on the same planet. Let's discuss which is the best way for us."

Anyway, I felt that referendum makes people more powerful for politics. That's I want to do it in Japan.

The book I wrote is written by only Japanese so far. The crowdfunding site is also only in Japanese. Sorry about that. I will absolutely publish it translate to English someday.