"Referendum around the world for Japanese" 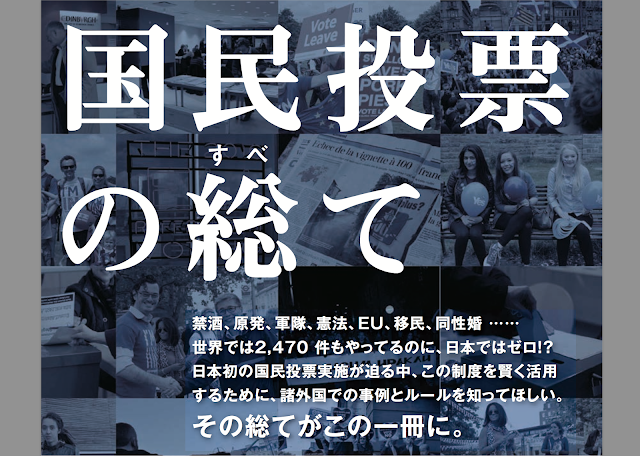 I research and report about the referendums mainly in Europe countries for 5 years. I came back to Japan last month, now I started publishing project "Referendum around the world for Japanese" We Japanese are facing the first referendum in nationwide in our history. We should learn about world's referendums before taking place it.

I got a chance to write a report for a book which my respectful journalist Hajime Imai's.

We will publish a book of "Referendums around the world for Japanese".

Hello, We are the Member of Publishing "Referendum around the world for Japanese" Committee. Alcohol policy, Nuclear, Conscription, EU, Immigration, Same-sex marriage... There are over 2500 referendums which have already done in the world. However, in Japan, it has never done ever in our history. Therefore Japanese people don't know well about the philosophy, rule or precedents. We will explain for Japanese many real cases of referendums in the world. We publish this book without publishing company.

We set up a committee to publish and spread the book "Referendum around the world for Japanese". There are over 30 people who are, lawyer, office worker, professor, theatre owner, artist, designer and so on. We think we should make use of direct democracy such as a referendum for local and even in Nationwide.

Foreign countries have held referendums quite an important theme, for example, about "EU" in UK, France and Netherland, and "Nuclear" in Switzerland, Italy, and Sweden. Especially Switzerland used the referendums for making the decision about "Conscription" and "Immigration" and "Tube baby". These are just some samples. These things are not known well for Japanese. Therefore, we will introduce the list of 500 referendums of 2500 referendums which have already done in the world. We choice about 30 referendums, then introduce it concretely. About 15 cases which Hajime Imai and Kentaro Oshiba did field work are presented specifically with Poster, ballot paper.

◆Why we start the project.

The typical image of a referendum for Japanese is "Populism" or "denial of parliamentary democracy" Japanese don't know how the referendum is used. The knowledge how managed the referendums help Japanese to face the first referendum. We will publish not through any publishing company because we will show and explain about quite a critical opinion for all Japanese. That means the publishing company doesn't want to take the risk of complaints which we want to say. Always publishing company told us, "Please change the word more affable" or "We can't publish the book" like that. We will give our opinion without reserve. So that's why The book will be published by us directly.

We will publish in the English too but tt this moment in time only in Japanese. Sorry.

A politician sometimes makes a mistake, we people also make too. The problem of the indirect democracy, the government won't sometimes follow the opinion which majority people expect. Then "the sovereign power resides with the people" remains only in name. An extraordinarily important decision for the country, people should learn and participate in the process of deciding such as a referendum. Many Japanese have forgotten the power to change. There is a referendum which Japanese can use if we know it well.