12 reasons why we should say no to amend the constitution and war. 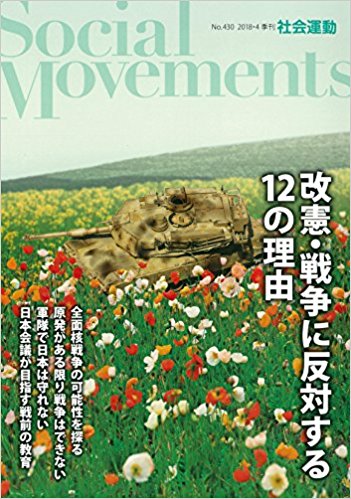 I interviewed two people for the magazine "Social movement".

Shiro Ogura used to be an engineer of a Nuclear power plant. He is sure that while using Nuclear power, we can't start a war because it becomes a nuclear bomb which an imaginary enemy has a trigger in a coastline.

Yoshifumi Tawara warns the extremely right lobby group "Nihon-Kaigi". He explains that the group is opposite sides of the current Japanese constitution. Nihon-Kaigi will set "Tenno" up to the head of state, and they will set the mind that Japanese should love Japan through education. They also think a nation is more important than a citizen. Their thought is based on reactionism.

In the magazine, there are many other interesting articles. Though it's written in Japanese, the best book to understand the current political situation in Japan.